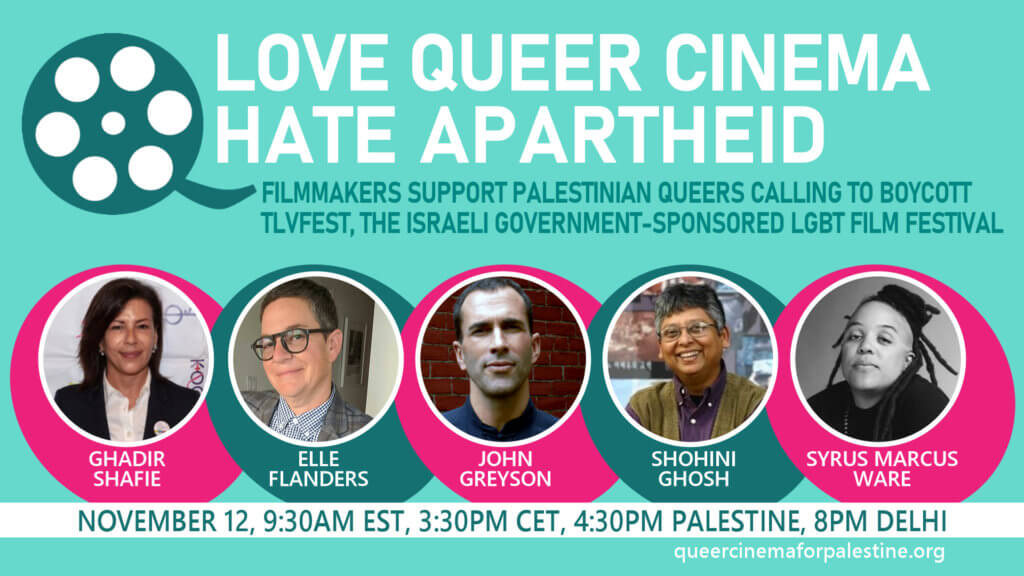 Editor’s Note: The following press release was issued on November 11, 2020 by the Palestinian Campaign for the Academic and Cultural Boycott of Israel (PACBI). Mondoweiss occasionally publishes press releases and statements from organizations in an effort to draw attention to overlooked issues.

More than a dozen filmmakers have withdrawn from TLVFest, the Israeli government-partnered LGBT film festival, which runs from November 12-21.

Queer Palestinians are calling for a boycott of TLVFest over its role in the Israeli government’s pinkwashing agenda, which uses LGBTQIA+ rights to cover up its apartheid regime and its oppression of millions of Palestinians, queer and non queer alike.

This year, TLVFest expanded its partnership with the far-right Israeli government to include the notorious Ministry of Strategic Affairs, which leads the government’s overt and covert repressive efforts to stem the tide of international solidarity with Palestinians, in coordination with Israel’s criminal secret services, the Mossad.

Six of the filmmakers withdrawing from TLVFest this year also joined more than 160 filmmakers from over two dozen countries signing the Queer Cinema for Palestine pledge, including John Eames, director of the feature film March for Dignity (UK), Maggie Bailey, director of Sweet Sweet Kink (US), Andrew Blackman, director of Inferno (New Zealand) and Victor Costa Lopes, director of Revoada (Brazil). Signatories pledge not to participate in TLVFest or other Israeli government-sponsored events “until Israel complies with international law and respects Palestinian human rights.”

The filmmakers, representing over half the Brazilian shorts at TLVFest, have requested their films be withdrawn from the program in response to the call from Palestinian queers.