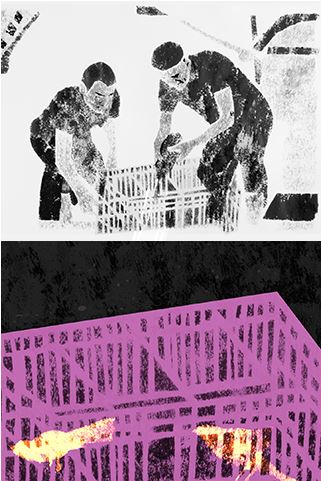 The Canadian poet Doyali Islam's award-winning poem 'Water for Canaries' concerns her metaphorical narrative meditation on a photograph taken during a ceasefire after the bombing of Beit Hanoun in 2014. Animator Suzie Hanna has collaborated to create a short poetry animation using hand cut stencils and paint to emphasise the chaotic atmosphere and the fragile reflective celebration of life in the midst of destruction.

How can we witness a world in which the moon and the drone hang in the same sky? What can the evolution of dinosaur into bird tell us about human survival? In “water for canaries”, award-winning Toronto poet Doyali Islam contemplates an Associated Press photograph taken during a ceasefire within the July 2014 bombing of Beit Hanoun. Islam’s poem acts as solemn witness but also achieves a moment of lift-off in which Palestinians reveal their extraordinary courage, resilience, and mercy. UK animator Suzie Hanna has collaborated to create a short poetry film using hand-cut stencils and paint to emphasize the chaotic atmosphere and to celebrate the fragility of life amid destruction. doyali-islam.com & suziehanna.com

The poem “water for canaries” is from Doyali Islam’s 2019 poetry book, heft, published by McClelland & Stewart, a division of Penguin Random House Canada.