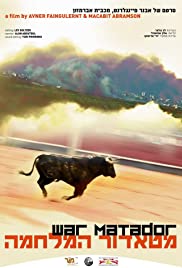 In January 2009, during the war on Gaza, many Israelis travelled from all
over the country to observe the bombs falling and heavy smoke rising from
the Gaza Strip. At times a carnival atmosphere prevailed, as spectators
exhibited an alarming level of enthusiasm for these scenes of overwhelming
firepower and distant suffering. With its title suggesting parallels with
the macabre rituals of a bull fight, War Matador is a disquieting essay
about voyeurism and nationalism, suffering and tourism, in a context of a
lasting asymmetric conflict.