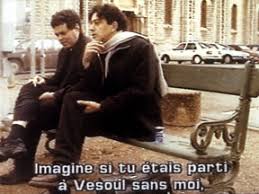 War and Peace in Vesoul

The directors of this 16mm French-Israeli documentary, Palestinian Elia
Suleiman (Chronicle of a Disappearance) and Israeli Amos Gitai, travel from
Paris to the War and Peace Film Festival in Vesoul. On the train, the
longtime friends chat about their pasts in Haifa and Nazareth, their
passports, and foreign travel. In Vesoul, they meet with both the festival
director and the French-speaking press (with Gitai translating for
Suleiman). Shown at the 1997 Venice Film Festival. ~ Bhob Stewart, Rovi