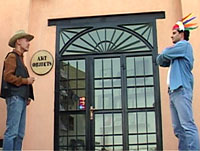 Always Look Them in the Eyes (2007) purports to be an exploration of Israeli-Palestinian relations, but as explicitly stated at the start of the film, any filmmaker who wants to address this topic must first “see” Israelis. El-Hassan begins with her own first encounter with an Israeli from her childhood in Beirut. There she would see Abu Reesh, an Israeli spy who lived under deep cover as a madman on the streets of Beirut until the Israeli invasion of 1982. To have lived among Arabs all those years must have changed him, she speculates. The remainder of the film consists of conversations El-Hassan has with Palestinians about their own encounters, or lack thereof, with Israelis. their uninformed speculations about Abu Reesh. and her vain attempt to engage Israeli soldiers at a checkpoint in conversation. She interviews Laila Khalid, the PFLP activist known for hijacking two airplanes in the late 1960s and early 1970s. She attempts to understand Israelis by having a friend act the part of Abu Reesh, and by asking Palestinians on the streets of Ramallah to pretend to be Israelis.

Throughout the film El-Hassan resolutely asks impossible questions of non-experts. She seeks to understand Palestinian-Israeli relations through the street play of little boys and listens politely, if incredulously, to one child’s description of the prophecies of a Tunisian conspiracy theorist. “Do you believe him?”, she asks the boy. “I support him!” [ba-ayyaduh], he replies, employing a term often used to express affiliation with a political leader. She offers her own unfounded theories, postulating that an inexplicable quarrel among the young Palestinians who accompany her to an Israeli checkpoint is caused by “the situation”. whether she means the general situation of living under occupation or the specific situation of confronting Israeli soldiers at a checkpoint is left ambiguous. As in her other films, El-Hassan devotes considerable time to apparently extraneous matters and faintly embarrassing scenes of exasperation or self-importance. She includes conversations with two men who are skeptical of her film project, and another with Laila Khalid’s son, who returns home from an all-nighter at university just as El-Hassan is about to interview his mother. She incorporates a long exposition by a friend on an enormous painting that her husband insists on hanging in their sitting room. Most of the film is shot with a roughly handled hand-held camera. In her only interview with a well-known person, the one with Laila Khalid, she uses a tripod. However, she frames the interview with the interlude with Khalid’s son and at one point during the conversation inexplicably zooms in and out of Khalid’s face, breaking the mimesis and reminding her viewers of their position as spectators of a staged interaction.

Few if any “facts” are conveyed in Always Look Them in the Eyes, and the project of discovering who the Israelis are is, as is the case with all projects El-Hassan’s purports to undertake in her films, a failure. Just as El-Hassan fails to avoid filming violence in Newstime, to use film to help her friends Samia, Sureida and Ra’eda in Three Centimeters Less and to find the lost Palestinian Film Archive in Kings and Extras, she does not come to know the Israeli other in her most recent film. What El-Hassan does achieve is to deconstruct the hagiography surrounding the victimized but steadfast Palestinian that permeates so many sympathetic portrayals of Palestinians. Instead, she teases out of her subjects other utterly human behaviours. As a result, she succeeds in challenging the notion of Palestinians as a people who are reduced to making claims through their photographic images. Her Palestinians use the civic space of photography to communicate in the seemingly trivial ways that people not living in states of disaster are wont to do. They posture and pose, theorize, play, argue, anger, joke and suspect, or politely answer silly questions.