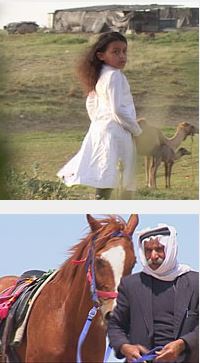 ALL THAT REMAINS (Ma Tabqa Lakum)

Palestinian Arab Bedouins once peopled the entire Naqab (Negev) Desert, a
region which accounts for 60% of historic Palestine. With the creation of
Israel in 1948, the majority of these Palestinians were uprooted. Those who
remain are either being forcibly concentrated within one of seven
designated townships or, if they refuse to abandon their lifestyle and
economy, end up living in one of 46 "unrecognized villages" lacking water,
electricity, schools, roads or medical services. Nada El Yassir's powerful
documentary explores the struggle of these Bedouins of the Naqab against
Israeli policies that aim to strip them of their land and their way of
life.

All That Remains will conclude the 2008 Palestine Film Festival. Following
the screening, there will be a panel discussion on "The Continuing Nakba"
which will expand on the themes of the film to survey the ongoing processes
of expulsion, exclusion, and discrimination which characterise the ethnic-
cleansing of Palestine, past and present. Speakers Speakers include film
director Nada El Yassir and Mohammed Zeidan, chaired by Eyal Sivan.