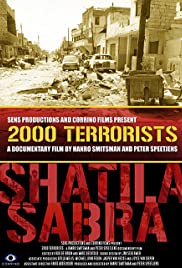 In 1982, following Israel's invasion of Lebanon, the PLO was evacuated from Lebanon, while the international community undertook to protect Palestinians remaining in the country.
However, Israeli defense minister Ariel Sharon declared that '2,000 terrorists' remained in Sabra and Shatila refugee camps. Monitored by the Israeli army, a Lebanese militia entered the camps to exterminate these remaining 'terrorists'.
Two days later more than two thousand civilian inhabitants were killed: men, women and children, in what the United Nations officially declared to be genocide.
The film centers on the search for justice of four survivors who are among a group that has initiated legal action against Sharon and others responsible for the killings.

This movie tells the story of the horrendous massacres of Sabra and Chatila refugee camps in 1982, where the Israeli occupation army used Lebanese Christian Phalangists to exterminate over 2000 Palestinian civilians consisting mostly of women and children in 40 hours... The Phalangists also filed hundreds of people into the camp's stadium and most of the people never came back.

The main forte of this documentary is that it's the work of a man who's neither an Arab nor an Israeli, so it's the closest thing to an impartial perspective... Although in 1983 an independent Israeli commission concluded that Ariel Sharon (previous Israel's PM) was indirectly responsible for the massacres, so there isn't really much argument about the historical facts anyway.

In a nutshell: This's a must-see for those who are interested in the human side and truth about the middle east conflict. (source: User Review IMDb)