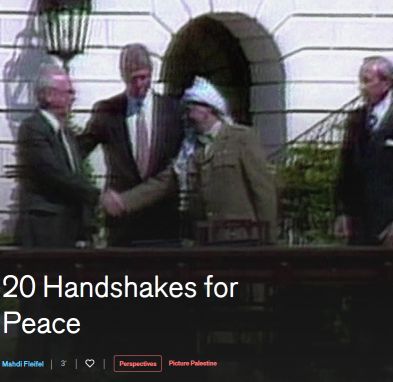 Synopsis
“I remember the handshake very clearly. My dad recorded the ceremony on video and would play it over and over again. He could not believe what had happened. In fact, none of us could. One time he threw his shoe at the TV and shouted so loud, the next door neighbours complained about him.” Listening to the last interview with Edward Said while watching the ceremony made me realize that father’s anger was because chairman Arafat was the first one to reach out his hand.

Biography
Mahdi Fleifel is a Danish filmmaker of Palestinian origin. Born in Dubai, he was raised in the Ain El-Helweh refugee camp in Lebanon and later in the suburbs of Elsinore, Denmark. He began filmmaking at an early age, a hobby he picked up from his father’s obsession with video cameras. Fleifel studied at the NFTS (National Film and Television School) in England under directors Udayan Prasad, Ian Sellar and Stephen Frears. His first year film, “Arafat & I”, screened in many international festivals and won prizes in Romania, Italy and the Czech Republic. In 2010 Fleifel and Irish producer Patrick Campbell set up the London-based Nakba FilmWorks through which they released Fleifel’s autobiographical feature “A World Not Ours”. The film is currently on the festival circuit, and has received multiple awards in Brussels, Krakow, Reykjavik and Abu Dhabi, and the Peace Film Award at the Berlinale 2013.